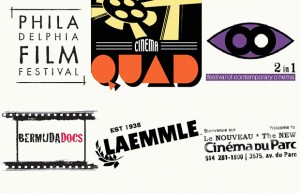 We Are Legion kicked off its theatrical run in New York, Los Angeles, & Montreal last Friday. At the same time, We Are Legion screened as part of the official selection in The Philadelphia Film Festival, Bermuda Docs & Moscow’s 2-in-1 International Film Festival.

Since We Are Legion‘s theatrical run has begun, positive reviews have been flooding in from major news outlets. IMDB reported, “The end of 2012 is getting crowded with potential Best Documentary Oscar contenders, including Brian Knappenberger’s look into the ideologies and actions of the Anonymous collective…” The New York Times said, “The film is most illuminating in showing how democratic practice can still find a new voice and innovative means with each generation. The fascinating efforts of Anonymous can be messy, but so are many freedoms when asserted so boldly.” The Los Angeles Times said the documentary was “a tale of digital power-tripping both exhilarating and terrifying” and the Village Voice called it “a strange and amorphous moral awakening” and a “fascinating, incisive social history of the online network known as Anonymous…” 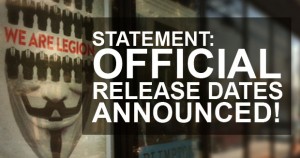 We have confirmed release dates for We Are Legion: The Story of the Hacktivists!

The film will begin its theatrical run on October 19th at the Quad Cinema in New York City, and in the LA area at the Laemle Pasadena Playhouse.  Director Brian Knappenberger will be on hand with special guests in both theaters on dates to be determined.  Our US theatrical run is also expanding, so stay tuned here for updates.  This weekend we also began a 7 city theatrical tour of Canada, starting in Ottowa and then going to Montreal, Nova Scotia, Winnipeg, Victoria and in Edmonton and will screen at the Bloor Hot Docs Cinema in Toronto on the 5th of November.

On October 30th, we go online with the final and official version of the film, preorders coming this week.  It will be available for purchase here on the website as well as on iTunes and other broadband platforms.  We are also very excited to announce that the film’s official DVD and BluRay will also be available directly from our website three weeks later on November 23rd.  Preorders are now available.  In addition to the full film (with 5.1 surround sound) the DVD and BluRay will include an additional 22 minutes of material.  The extras will have extended, in depth interviews with some of our film’s subjects, some prominent hackers not featured in the documentary, more analysis and thoughts on Wikileaks, further discussion about Anonymous member-turned-FBI informant Sabu, and thoughts from tech author and speaker Richard Thieme on how technology is re-wiring our brains and why we need to nurture our “dark side.”

As many of our friends, supporters (and the film’s subjects) know, making this film has been an ongoing journey.  When we started the film Hosni Mubarek was still the President of Egypt!  As new and interesting events transpired, we have gone back into the film and added them.  That made this film a living, breathing document for most of the last year as we changed and altered it with the dramatic dynamics of Anonymous.

Also for us, the process of continually re-working the film as it has screened at festivals has been very unusual.  Usually films are finished, then make the festival rounds and (if they are lucky) released.  We updated this film continually throughout the year.  A stirring example of this was the Occupy protests, we were sitting in the editing room cutting the film as protests (and people in Guy Fawkes masks) were marching by just outside our windows.  It was surreal.  We’re not sure a film has ever been made and screened in progress like this in such a short period of time, but we are finally finished.  Anonymous will no doubt continue to evolve, but this film documents a particularly intense and dynamic chapter of it’s history.

Having said that, several of our early cuts have already appeared online.  We expected this would happen and are excited by the rave early reviews, but so far those versions have been wildly out of date – all of them are missing huge chunks, key scenes and entire interviews.  They are very much incomplete films, so we really hope you see the full version.  If you’ve seen one of the older versions and like what we’ve accomplished over the last few years then come back and check out the final film, or support us by buying a DVD or BluRay, the film’s official poster designed by artist Michael Byzewski, or the unbelievable original soundtrack by John Dragonetti.

Or just help us by shouting about it from the rooftops!  Independent documentaries made outside the studio system face huge challenges getting seen, and we’ve always hoped this film would have a long life with people beyond the already converted.  Getting out the word really helps!

Also, in the spirit of the film, we’ve decided to donate a portion of any possible profits to groups we think deserve it and whose goals are in line with what we see as the principles of the film.  To start, ten percent will go to the Electronic Frontier Foundation.  We’re big fans of the EFF, who describes their mission as being the first line of defense “when our freedoms in the networked world come under attack.”   Another ten percent of the profits will go to both help Free Anons – a passionate group of people who are currently facing charges for online protest – and to other human rights or technology groups we think are behaving well defending human rights or freedom of speech in a digital age.

Beyond that we will continue to make more disruptive independent documentaries about compelling people, groups and stories we think are reshaping our world.  Stay tuned.  We are firm believers in the ability of the internet to reach audiences in new and powerful ways, and to tell stories that are too challenging for (what is currently) a largely broken news landscape consolidated into a handful of companies deciding what you see.  Between that and a blockbuster-driven Hollywood that is often tone-deaf to new technology (and supports draconian laws like SOPA) we think this is the moment where independent filmmakers can step forward with stories that aren’t getting enough attention and about which the world needs to know.

So support us.  Come out and support the film.  Support those who are fighting for our digital freedoms and support independent documentaries who are working to tell stories that need to be told.

Studio Movie Grill, the innovative theatre chain that combines great movies with top-notch food & drinks, has just announced a special 2-night run of We Are Legion on October 23rd & 24th. The film will be playing at SMGs in Dallas, Texas, Houston, Texas, & Scottsdale, Arizona.

So, come out & support We Are Legion: The Story of the Hacktivists & enjoy SMG’s Beer + Burger Tuesday or Endless Pizza Wednesday, while you’re at it.

We Are Legion hits theatres in New York, Los Angeles, & Montreal this Friday for a one week run from October 19th – 25th. Please come out to support the film! 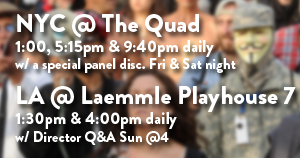 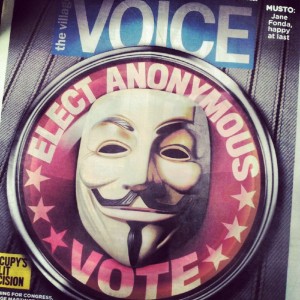 On the eve of We Are Legion‘s U.S. theatrical premiere, positive reviews for We Are Legion have been rolling in. On Tuesday, IMDB wrote, “The end of 2012 is getting crowded with potential Best Documentary Oscar contenders, including Brian Knappenberger’s look into the ideologies and actions of the Anonymous collective…”

Recently, We Are Legion has been labelled “A smart, funny, fascinating and often inspiring film” by CinemaBeach.com, ”both illuminating and transfixing” by The Montreal Gazette , and a documentary “to be reckoned with” by About.com.

Perhaps the biggest boon to the film comes from a The Village Voice, whose Michelle Orange called the film “engrossing and essential to watch.” Orange goes on to say that, “[in] We Are Legion: The Story of the Hacktivists, former Frontline producer Brian Knappenberger’s fascinating, incisive social history of the online network known as Anonymous, those early grapplings are the source of a strange and amorphous moral awakening.”

We Are Legion‘s world tour continued this weekend, with screenings in Arizona, Australia, & Brazil.

Finishing up its four-day-run at the Festival do Rio, We Are Legion‘s final screening was on Thursday, October 11th. That same day – 8200 miles away from Brazil – the film also screened to a packed house in Sydney, Australia. At the 2nd annual Antenna Documentary Film Festival, We Are Legion played alongside 29 other documentaries, spotlighting social justice issues.

Back in the states, We Are Legion was featured as part of the official selection of Arizona’s Flagstaff Mountain Film Festival. In additional to its four day festival, the FMFF has been providing film screenings and offer curricular links to more than 1400 students in Flagstaff and the surrounding areas for the past nine years. We Are Legion had the privilege of being screened in the city’s historic Orpheum Theatre. 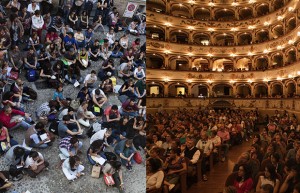 Beginning on October 1st, We Are Legion was shown to packed houses in Milwaukee, Italy, Tacoma, & Rio de Janeiro.

In the U.S., the documentary  was featured in the official selection for Milwaukee Film Festival, which experienced its most successful weekend since the festival’s founding in 2008. We Are Legion made 88Nine Radio Milwaukee’s list of Festival Picks. The film was also a proud part of Washington’s Tacoma Film Festival. The program was organized by & held in The Grand, Tacoma’s only non-profit art-house movie theater. We Are Legion also had the honor of being screened at the Tacoma Art Museum.

We Are Legion made its Italian debut at the Internazionale a Ferrara. The festival, which sets out to showcase the best in international cinema, ran from October 5th – 7th.

Finally, three screenings of We Are Legion were held at the Festival do Rio, in Rio de Janeiro (with one final screening later this week). The festival, which is the largest film festival in South America, celebrates its 14th anniversary this year. Vik Birkbeck, the festival’s international coordinator, told The Rio Times that We Are Legion is one of five films in the festival that is “absolutely unique”.

We Are Legion ended September in-style with 7 screenings at 3 different festivals.

The weekend began in Iceland at the Reykjavik International Film Festival. We Are Legion then moved its way to Northern California for both the Palo Alto Int’l Film Festival & the Oakland Underground Film Festival. Director Brian Knappenberger managed to make it to both festivals for Q&As after the screenings.

In Palo Alto, Knappenberger was joined by Ryan Singel – Editor of Wired.com’s Threat Level – who is also a participant in the film. In Oakland, many who participated in Occupy Oakland turned out not only to support the films, but to see themselves in the documentary.