The Writer/Director of We Are Legion the Story of the Hacktivists is currently at work creating a new documentary about the internet visionary and activist Arron Swartz.  Aaron’s powerful story is a poignant chronology of internet history, as well as a story about the cracks in an outdated legal system that lead to such tragic consequences.

If funded, the new documentary will also have an original soundtrack by “We Are Legion” composer John Dragonetti.  The project is an opportunity to explore the influence one incredibly talented programmer and celebrated internet visionary had on the discussion of information access and what his involvement in such a volatile subject means for all internet users.  HELP US MAKE THE FILM!  Support the Kickstarter!

Since we all love the internet, everyone involved with the film is also a fan of the Internet Archive.  Among other things, it is home to the biggest single (and searchable) collection of NASA images, the Open Library, and of course, the Wayback Machine.  Join filmmaker Brian Knappenberger, journalists Quinn Norton and Ryan Singel and lawyer Thomas Nolan for a screening of “We Are Legion: the Story of the Hacktivists” on Friday, March 22nd in the “Great Hall.”   If you are in the Bay area, come see the film and stay for what promises to be a fascinating night of discussion about Anonymous and internet activism!

Richard Thieme talks Wikileaks and why hackers and others are so angry over the treatment of Bradley Manning.

In response to threats of internet censorship, the hacktivist collective Anonymous has joined the fray as the Israeli-Palestinian conflict continues. In retaliation of missiles fired by Gaza militants, an Israeli air strike against the Gaza-Strip began on November 14th. CNN reports that as of November 19th, the death toll has reached approximately 100 Palestinians and three Israelis.

One day after the fighting began, Anonymous posted this video on YouTube. According to its speaker,while Anonymous has “stood by with the rest of the world and watched in despair the barbaric, brutal and despicable treatment of the Palestinian people,” a line was crossed when Israel threatened to “sever all Internet and other telecommunications into and out of Gaza”. The speaker goes on to say, ”We are Anonymous, and nobody shuts down the internet on our watch,” promising Palestinians that ”We will use all our resources to make sure you stay connected to the internet and you remain able to transmit your experiences to the world.”

Using the handle #OpIsrael, members of Anonymous are posting to an on-going list (now topping 650) of Israeli websites that have been defaced. The Examiner reports that they have also leaked the personal information of 5000 Israeli officials. According to The Telegraph, there were over 44 million hacking attempts against Israeli government websites over the weekend, with the most damage being done by Anonymous.

Similar to activities seen during the Arab Spring, Anonymous has created a “care package” for Palestinians. The first section contains first aid information. The second half includes instructions for getting online if the internet is shut down. Both sections are written in Arabic and English.

According to The Examiner, the UAE has made it illegal to wear a Guy Fawkes mask. A statement by a Dubai Police official warns that, “Using any symbol that insults the country or instigates unrest against its system is not allowed.”

This weekend, We Are Legion wrapped up its Canadian run, after playing for two weeks in theatres across Toronto, Victoria, Edmonton, and Winnipeg. The documentary was met with positive reviews from the Canadian press, including the Winnipeg Free Press, Canadian Dimension, and O.Canada.com.

At the same time, We Are Legion played at two special engagements. After a great three-day run at the Seattle International Film Festival this June,  the film was brought back for a special engagement at the organization’s beautifully restored theatre SIFF Cinema Uptown, for a weekend engagement. The documentary also played to a large audience in Manchester, at a screening held by Kino Indie Features. Filmmaker Brian Knappenberger was present (via Skype) for a Q&A with the audience, following the UK screening.

We Are Legion has had its first of three screenings at the International Documentary Film Festival Amsterdam.  IDFA, the world’s largest documentary film festival, celebrates its 24th anniversary this year. The prestigious festival averages 120,000 visitors each year. It continues through this weekend, with additional performances of We Are Legion on Thursday and Sunday. For more information, please check out the IDFA website.

On November 13th, the video-sharing website Vimeo unveiled its new rental service. We Are Legion: The Story of the Hacktivists is one of just six films that were hand-picked by Vimeo staff members to preview the new service. Other staff picks include the independent documentaries Beauty is Embarrassing, Jeremy Jones’ Further, Shut Up and Play the Hits, Sunny, and Son of the Clouds: The Last Colony.  Vimeo staff member Jeremy Boxer writes that the films chosen “are exemplars of a new age of creative sustainability, one in which creators can sell their own work directly to their fans on their own terms.”

Boxer goes on to say, “Our mission is to support totally original video and the people who create it, which means providing more than a home. It means creating an environment where creators can access the resources to make their next film, and the one after that. Our new pay-to-view service enables creators to upload and distribute work that they depend on for their livelihood, all with easy setup and affordable rates. In turn, our community gets access to amazing work from the world’s leading filmmakers.”

Films rented through the service can be viewed on nearly any device, including smart phones, tablets, connected TVs, and more. We Are Legion is currently available as a 48 hour rental for $4.99.

We Are Legion: The Story of the Hacktivists is returning to Seattle for a command performance. After a very successful showing at the Seattle International Film Festival this Summer, the documentary will be returning to SIFF’s Cinema Uptown theatre this weekend.

Not surprisingly, Guy Fawkes Night (and the days preceding and following it) were big for Anons around the world, as well as the documentary We Are Legion. Special Guy Fawkes screenings were held at the Starz Denver Film Festival, the University of Las Vegas, Nevada, Toronto and Edmonton. At the same time, We Are Legion quickly climbed iTunes charts, soon becoming the #5 documentary on the site.

The University of Nevada, Las Vegas’ screening, which was hosted by their Movies that Matter screening series, featured a panel discussion with writer/director Brian Knappenberger and Mercedes Haefer, one of the film’s main interviewees. 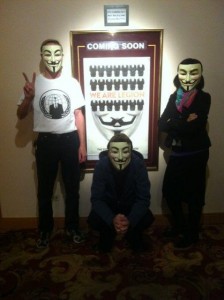